REAL FINANCIAL LITERACY: THE HISTORY OF THE WALL STREET MELTDOWN

BANKS TOO BIG TO FAIL

Though the concept of Banks Too Big  to Fail has only come into popular culture in recent years, the creators of this website had been painstakingly researching this trend which has actually been occuring for decades. Banks didn't suddenly become too big to fail.

This trend and evolution has been happening for many years. This chapter and its many sections below has compiled all the research of the "how" and the "why" of this disturbing trend so that readers and researchers don't have to waste many years trying to figure out this puzzle.

The information in this chapter and in its many sections on the history of too big to fail banks has been curated carefully over the years and will provide readers with a treasure chest of information that enables them to make sense of how we have gotten where we have.

FROM THE BIG SHORT "I now realized there was an entire industry, called consumer finance, that basically existed to rip people off.” - Steve Eisman

One would have had to have been in a coma for the past eight years not to realize there has been an ongoing Wall Street banking conspiracy in the United States. The Government Accountability Office (GAO) tallied it up and found it amounted to $16 trillion in secret loans from the Federal Reserve – an unfathomable bailout never approved by Congress. On May 20 of last year the U.S. Justice Department documented a vast conspiracy by global banks in the foreign currency markets with the banks admitting to the felony charges. The former heads of Federal regulatory agencies have written books about the conspiracy. Frontline and Sixty Minutes have produced documentaries on it. Banking whistleblowers have organized to fight it in an effort to save the country. A major motion picture, The Big Short, was released this year which put one aspect of the conspiracy into layman’s language and was based on a book by Wall Street veteran, Michael Lewis. Wall Street On Parade has chronicled the ongoing banking conspiracy for the past decade. 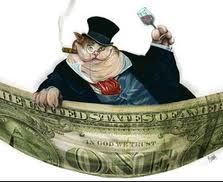 The FDIC is often appointed as receiver for failed banks.  This includes information on the acquiring bank (if applicable), how your accounts and loans are affected, and how vendors can file claims against the receivership.

Failed Financial Institution Contact Search displays point of contact information related to failed banks. This list includes banks which have failed since October 1, 2000. To search for banks that failed prior to those on this page, visit this link: Failures and Assistance Transactions

MAKE SURE YOU SEE THE CURRENT FDIC FAILED BANK LIST

2015 SEC grants regulatory waivers so they can get away with it.

U.S. securities regulators will release new guidance on how they decide whether a company should retain leeway in raising capital, after criticism that such waivers are too often rubber-stamped for banks that have broken the law.
One such privilege is the ability to be a "well-known seasoned issuer" or WKSI -- a status that lets a company continually raise capital more readily without prior SEC approval. Another privilege, which is widely viewed as the most important for large U.S. companies and banks, is an exemption under "Regulation D Rule 506." This rule lets companies raise an unlimited amount of private capital without being required to register it with the SEC.

WORLD'S 100 BIGGEST BANKS - DEPENDS ON WHO DOES THE ACCOUNTING!

I am a huge dick That skull fucks Americans With their own money
​I have Mortgage Fraud, Market Manipulation, Credit Card Abuse, Libor Rigging and Predatory Lending.
AM I DIVERSIFIED?  #AskJPM

REMEMBER HOW HEALTHY AMERICA'S ECONOMY USED TO BE

"A Wagner Act for Public Employees": Labor's Deferred Dream and the Rise of Conservatism, 1970–1976 PDF

JERRY WURF the president of the American Federation of State, County, and Municipal Employees from 1964 to 1981, speaks with characteristic passion at a 1972 union conference.

AMERICA HAD A NATIONAL DEBT, OF LESS THAN 1 TRILLION DOLLARS, WAS THE WORLD'S LEADER EXPORTER OF MANUFACTURED GOODS,  WAS FILLED WITH GOOD PAYING UNION JOBS.

As the 1970s began, public workers in the United States were participating in the most profound union upsurge since the 1930s. Sanitation workers, teachers, fire fighters, and others were flocking into unions, creating the promise of a liberal political resurgence during the presidency of Richard M. Nixon. Halting the growth of public sector unions became a crucial task for the emerging conservative movement of the mid-1970s, argues Joseph A. McCartin.

Labor's unsuccessful effort to pass a national collective bargaining law for state and local employees illustrated both the growing divisions within the Democratic coalition and the growing strength of the conservative activism that later helped usher in the era of Ronald Reagan. (pp. 123–148)​​

HOW DID WE GET FROM WHERE WE WERE TO THE AWFUL MESS WE ARE IN RIGHT NOW?

President Reagan and his staff between 1981–1989 broke the unions and brought on deregulation.

Law exists for two reasons, to take your money or your land.

Corporations exist for one reason, take your money.

With no regulations and no oversight to protect the commons, the Church of Corporate Greed went wild.

The rest, as they say, is history. There is ample more research for you to sift through in this "Too Big To Fail" section to make clear the transition that took place and how we got to where we are now.

John C. Whitehead, a Wall Street banker who led Goldman, Sachs & Co.'s graduate of Haverford College and Harvard University was responsible for the international expansion in the 1970s and '80s. Whitehead joined Goldman Sachs in 1947 and worked his way to senior partner and co-chairman before leaving 38 years later to become deputy secretary of state under President Ronald Reagan. He also served as director of the New York Stock Exchange, chairman of the Securities Industry Association and chairman of the board for the Federal Reserve Bank of New York.  In 1985, he was appointed by Reagan as deputy secretary of state. He remained in the Department of State's No. 2 position under Secretary George Shultz until January 1989.

Eight years of the Bush administration produced the largest upward shift of income in American history.

According to the Center on Budget and Policy Priorities (September 9, 2009),
​two-thirds of the nation's total income gains from 2002 to 2007 flowed to the top 1% of US households.

Why Isn't Wall Street in Jail?

Financial crooks brought down the world's economy — but the feds are doing more to protect them than to prosecute them. All of this paints a disturbing picture of a closed and corrupt system, a timeless circle of friends that virtually guarantees a collegial approach to the policing of high finance.
But even beyond that, the system is skewed by the irrepressible pull of riches and power. If talent rises in the SEC or the Justice Department, it sooner or later jumps ship for those fat NBA contracts. Or, conversely, graduates of the big corporate firms take sabbaticals from their rich lifestyles to slum it in government service for a year or two. Many of those appointments are inevitably hand-picked by lifelong stooges for Wall Street like Chuck Schumer, who has accepted $14.6 million in campaign contributions from Goldman Sachs, Morgan Stanley and other major players in the finance industry, along with their corporate lawyers. As for President Obama, what is there to be said? Goldman Sachs was his number-one private campaign contributor. He put a Citigroup executive in charge of his economic transition team, and he just named an executive of JP Morgan Chase, the proud owner of $7.7 million in Chase stock, his new chief of staff.

BANKS TOO BIG TO FAIL, NAIL AND JAIL

1956 The Organization Man and Groupthink and the Corporate Culture by Journalist William Whyte.

The Slow Burn: If you thought The Matrix was only a movie, think again.
The slow burn is a political culture and economy managed through principles of economic warfare. One of the most important aspects of the Paulson Plan to re-engineer US financial regulation is the assertion of complete control of payment systems by the Federal Reserve and gaining access to the data of essentially any financial institution.

Sunday, October 05, 2008 More on N.J. Judge Linda Feinberg Sequoia Voting Systems Cover up
Andrew Appel writes "The AVC Advantage can be easily manipulated to throw an election because the chips which control the vote-counting are not soldered on to the circuit board of the DRE. This means the vote-counting firmware can be removed and replace with fraudulent firmware."

Sunday, October 12, 2008 Voting in 2008 A Report by Common Cause and the Century Foundation
The report, "Voting in 2008: 10 Swing States," examined what, if any, progress has been made since 2006 in seven battleground states: Florida, Georgia, Michigan, Missouri, Ohio, Pennsylvania and Wisconsin.

Thursday October 2, 2008 Judge Suppresses Report on Voting Machine Security
Three weeks after we delivered the report, on September 24th Judge VOTE FRAUD - NJ - Judge Feinberg ordered us not to release it. This is part of a lawsuit filed by the Rutgers Constitutional Litigation Clinic, seeking to decommission of all of New Jersey's voting computers.

The Social Security Act of 1935, was 28 pages, arguably one of the biggest social programs ever devised.

7/18/2010 The Finance Reform Bill is 2,319 pages. The broadest overhaul of U.S. financial rules since the Great Depression won final approval in the Senate on Thursday. By a vote of 60 to 39, the Senate gave final approval to a sweeping measure that tightens regulations across the financial industry. Senator Feingold standing alone among the Democrats in voting against this. It's a sweeping bill, but the major parts of it the Volcker rule, and Lincoln rule, have been severely watered down, the derivatives business stays the same as before. http://www.cnbc.com/id/38262799

September 3, 2008 Palin Republican nominee for VP Harry Truman said about People in Public Office. Shame and Scandal in the Family.

Sarah Palin's Husband Did Not Want Wife to be Mayor: evidence of Palin daughter Bristol baby daddy and now husband who never wanted Palin to be the mayor.